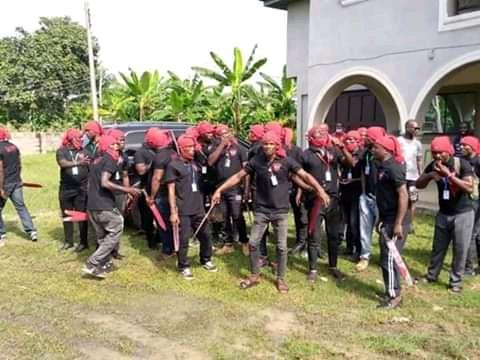 Popular vigilance group, Ospac which operates across the communities in Emohua Local Government Area of Rivers State have been dissolved by Executive chairman of the Council, Tom Aliezi with immediate effect.

The dissolution of the group was contained in an announcement personally signed by Aliezi on Tuesday, February, 2.

According to Aliezi, the dissolution is as a result of “several reports of the unlawful activities of some bad eggs within the Vigilante groups, which is a complete deviation from the aims and objectives behind the establishment of the community vigilante groups in the area.

The ONELGA Security Peace and Advisory Council, popularly known as OSPAC, was established some years ago in Ogba/Egbema/Ndoni LGA of Rivers state of Nigeria.

the aim of the security unit is to assist the police and other security agencies to curb and mitigate crimes in the LGA. At the initial stage the aims were being fulfilled to an extent that other LGAs like Ikwerre LGA, Emohua LGA adopted the same security for the local government area.

Meanwhile, various allegations and reports say that the group have been involved in unjustified killings, abductions, operation of illegal detention facility, involvement in illegal oil bunkering and so on.
These abuses were also mentioned by the Rivers Police Command Police Public Relations Officer, SP Nnamdi Omoni, reacting to the dissolution of OSPAC in Emohua LGA. He said the dissolution was “inevitable”.

Moreso, he said the Local Government Chairman must work in synergy with the Police and other relevant security agencies to disarm the defunct OSPAC members in order to retrieve the large amount of arms and ammunition in their possession.

Advicing the Chairman, he called for reconstitution of another vigilance group, “with well-defined operational guidelines and proper profiling by the Police,” because “Emohua is one of the LGAs that is notorious for cultism and violent crimes in recent times”.

He further advised that the new vigilance group must have a structure that encourage holding leaders of the group accountable in a situation where a member of the group commits a crime and is nowhere to be found.

In all, Omoni acknowledged that OSPAC has been helpful, curbing crimes in communities in the LGA, especially the eradication of hijacking of passengers and vehicles, and armed robbery.

He said this was because they were locals who understood the terrains very well: “When the first OSPAC in Emohua LGA known as Rundele, Odegu Security Planning and Advisory Committee (ROSPAC) came on board, their first assignment was destruction of 3 camps in Ndele, 2 in Rumukpe, 2 in Rumuodogo, 1 in Rumuakunde all in Emohua LGA which were used as operational base by kidnappers, cultists, armed robbers operating along Emohua section of the East West road.

“Subsequently OSPAC uprooted all the operational base of the kidnappers in communities in Emohua LGA in conjuction with the Police which made gang groups to be in disarray.